SYHA in partnership with MAC Goaltending are proud to  provide the very best goaltending instruction for all ages and level of players. Bryan McDonald the Founder of MAC Goaltending will host a full season at Saugerties Youth Hockey.

If you are from another organization and would like to participate in this Goaltending instruction please contact SYHA President Mark Signore.

Mac Goaltending sessions run every other Wednesday starting on ????. There will be a total of 10 sessions. Groups are separated by age and ability. Contact President Mark Signore for any questions or information. 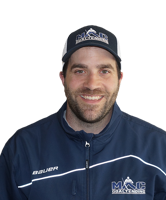 Bryan McDonald  is the founder and director of MAC Goaltending. Under the tutelage of former Ottawa Senators goalie consultant, Barry Madigan and ex Philadelphia Flyers and Anaheim Ducks goalie, Dominic Roussel, Bryan developed a passion for coaching the position. At just 12 years old, Bryan began working as a junior instructor for Louis Chabot’s “All East Goalie School” during the summer months. While playing junior hockey for the Green Mountain Glades (EJHL) and later with the Hawkesbury Hawks (CJHL), Bryan was heavily involved with the local youth hockey organizations. After attending Castleton State College, Bryan remained on staff as the goalie coach for the school. Shortly after, he started MAC Goaltending. Since it’s existence in 2008, the company has already produced numerous NCAA goalies at both the male and female levels. Additionally, Bryan has served as a consultant for several Colleges, Junior “A” programs, and for USA Hockey at the State and District levels. His stints include recruiting evaluator for Castleton, Wesleyan, and UCONN, as well as for the Green Mountain Glades and CD Selects.

The goaltending position must continuously evolve to adapt and stay ahead of today's fast paced brand of hockey. Goaltenders are dominating the sport at all levels in an age where it is the players who have every advantage at their disposal.

Efficiency has become a critical element to the success of today's netminders.

Long gone are the days of an isolated "style" of play such as the Stand-Up, Hybrid, or Butterfly, where each style would have situational advantages, but would also become exposed when used exclusively. Now all are blended and used strategically to construct consistent day in and day out goaltending at the highest level!